of Science and Technology

Department of Theoretical and Applied Biology

Our research aims at understanding the complex vector-parasite-host interactions in order to provide innovative ways that can be exploited for disease control.

about the RESEARCH group

We are based in the Department of Theoretical and Applied Biology at K.N.U.S.T. Our research aims to dissect the complex vector-parasite-host interactions in order to provide evidence-based solutions towards control of various vector-borne diseases. We conduct extensive research into protozoan parasites and vectors responsible for diseases such as Malaria, Trypanosomiasis and Cutaneous Leishmaniasis. Our areas of specialization include medical entomology, molecular parasitology, vector biology and ecology, seroprevalence, diagnostic testing among many others. Read more

As international efforts towards malaria elimination increase, accurate data on transmission intensity will be crucial for directing control efforts, developing and testing new interventions, as well as predicting the effects of these interventions under various conditions. However, current tools; the entomological inoculation rate, parasite infection and serological measures have limitations in either sensitivity at low-level transmission or lack the inherent ability to track short-term changes. Again changes measured by these traditional tools reflect either parasite or vector exposure but not both.  Read more

The overarching goal of the study is to validate novel malaria infectious-bite marker as a simple straightforward sero-surveillance tool to identify ‘hotspots’ and ‘hotpops’ for targeted interventions to yield maximum community-wide benefits.

This will be three -time point longitudinal community based survey at quarterly intervals cutting across both dry and rainy season.  Serological, parasitological and entomological as well as demographic data will be collected at household level.  The study will not discriminate participants in terms of age or gender but a representation of all age groups except infants of less than 6months where maternal antibodies drive immune response rather than exposure will be excluded.  Blood samples from finger prick will be taken from an average of 4 people per household from 100 households per community. Read more

This project is sponsored by EDCTP grant code TMA2016CDF1605 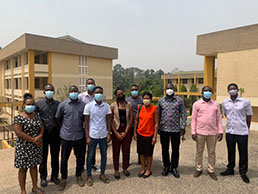 Dr. Adams is an Infectious Disease Specialist and M.D. for   the US Navy. Dr. Adams paid a visit to the Vector-Borne Infectious Disease Research Group to discuss emerging infectious diseases in the field of Tropical Medicine and the impact of COVID-19 on resource allocation. The VBID-RG team also had the opportunity to present our current research to the Navy Officer.

The VBID-RG team is extremely proud of Mr. Austine Tweneboah, a Research Assistant of the group, who was selected to make oral presentation  of his research during the 5th Africa International Biotechnology and Biomedical Conference (AIBBC) which took place between 8th-13th November, 2021 in Kisimu, Kenya. Mr. Tweneboah presented on the distribution and incidence of African Animal Trypanosomiasis (AAT) in Ghana. 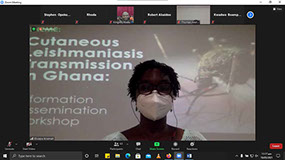 This programme was held virtually to sensitize  the public about the current state of Cutaneous Leishmaniasis, a neglected tropical disease in Ghana. The webinar also served as a means to communicate research findings by  the Vector-Borne Infectious Disease Research  Group to the public. Experts in the field were invited to speak and participants were encouraged to ask questions and provide feedback. Click here to read the final report and click here to view the gallery. 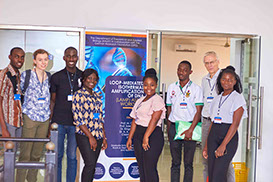 This 3-day training was held under the collaboration between Department of Theoretical and Applied Biology (TAB-KNUST) and the German Research Foundation (DFG). Participants obtained theoretical knowledge and practical training on molecular techniques such as Polymerase Chain Reaction and Loop-mediated Isothermal Amplification of DNA. Click here to read the report and here to view  the images. 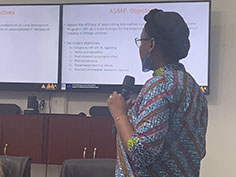 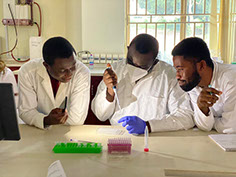 In collaboration with University of Bremen and KNUST Central Laboratory, VBID-RG conducted a one-week hands on ELISA workshop for a cohort of eighteen (18) graduate students at KNUST between 25-29th July, 2022. The workshop comprised morning lectures and afternoon practicals facilitated by Prof. Soerge Kelm (Uni. of Bremen). Participants were given the opportunity to present their results and awarded certificates of attendance. Click to read the final report.

Kingsley Badu holds a Bachelors degree in Biological Sciences, a Masters in Clinical Microbiology and a PhD in Biological Sciences. He also holds other certificates in Cell Biology and Molecular Parasitology. He has extensive experience investigating transmission of vector-Borne Infectious Diseases such as malaria, onchocerciasis, lymphatic filariasis and lately leishmaniasis...Read more

Dr. Kingsley Badu is a Senior Lecturer and Principal Investigator in the Department of Theoretical and Applied Biology at Kwame Nkrumah University of Science and Technology, Kumasi. He holds a MPhil degree in Clinical Microbiology and a P.hD. in Biological Sciences from TAB-KNUST.